The title of this post is a bit of a misnomer, ’cause this wasn’t a vacation at all, really, or at least the destination wasn’t. I had a meeting and conference in Natchitoches, LA to attend. In midsummer. Yeah, think about that for a second. But I’m all for making lemonade out of lemons. Or even better, limoncello. So I convinced Ben and Daria to come with me and make an EPIC FAMILY ROAD TRIP out of it. Honestly, Ben and I were very trepidatious about it: what if Daria hated it? What if we didn’t find anything for her to do? Turns out, our kid is a road-trip aficionado. Yay! OK, full disclosure: the iPad had way more to do with that than anything else. With some kid-headphones, she was happily watching Frozen/The LEGO Movie/Rio/Rio2/Cinderella/Despicable Me while we drove. Sample conversation:

Ben: Look, Daria, we’re driving through Atlanta. Do you see all the skyscrapers?
Daria: (looks up for a hundredth of a second) Grunt. (Looks back down.)

Daria was ecstatic at the idea of visiting yet another two-star hotel. Which made little sense to me, but I’m not about to complain. Even the boring hotel breakfasts made her giddy in anticipation. So Daria taught us that she can be counted in for the next road trip. I did learn other stuff as well.

Among the usual assortment of papers, I got to experience preservation nerdery of the utmost quality in Natchitoches. This lost corner of Louisiana is home to NCPTT, which is the reason we all converged there. I knew their work already, but got to visit their labs. It was eerily like “America’s Test Kitchen“, complete with bow ties. The only difference was that they were testing building materials, not food. Ever wonder what kind of window putty is the best? Me too. They’re testing that. Ever wonder what is the most effective way to stop rust from spreading? Yeah, they’re testing that too. I’ve never regretted going to the planning side of preservation, but this made me want to get in the lab and get all up in that science.

As I said, the destination for the trip was work, but I don’t just turn that off when I leave.
[aside: I hate the expression “I’m putting on my [job] hat here”. It’s not like my sensibilities change when I leave someplace. So obviously if I’m visiting a town I’m going to look at the architecture, even if I’m hanging out with family. Ok. End of rant.]
So both before and after Natchitoches there were some interesting preservation discoveries.

Art Deco in the heartland

Every town we passed had some incredible deco buildings. Unfortunately, most were in very poor shape. The history of these towns was all but clamored by the architecture: these places peaked in the twenties and have steadily lost downtown jobs and population since. Some places, particularly Jackson and Meridian, MS felt post-apocalyptic because they were so deserted. The Walking Dead team could save lots of money just filming there.

Over the course of two days, we visited Memphis and Nashville. The architecture is strikingly similar, and both towns also have a music alley lined with. Yet I loved Memphis and hated Nashville. Some of this was likely due to the high density of drunk people in Nashville (it was a Saturday evening), but there’s more to it. Two things in particular struck me:

I wonder whether others would feel the same, and whether they would isolate those particular issues. Anyone?

In Memphis, we visited two completely different historic sites: Graceland and the Civil Rights Museum. Both were wonderful. Graceland had all the shag carpeted ceilings and mirrored walls I was expecting. The Civil Rights Museum, meanwhile, was powerfully emotional. Trying to explain racism, slavery, and Jim Crow to my daughter was challenging to say the least. I’m inordinately glad that she just doesn’t *get* racism. Sample statement: “but mommy, skin color isn’t important. Look, touch my skin. It feels the same as other people’s skin.”

Back to my point: the museums were as different as can be in theme, tone, everything. But they both were in historic sites, and they both managed the flow of visitors in a linear manner. The civil rights museum did this particularly effectively: walking up, you see the motel where Dr. Martin Luther King was assassinated, but then the entire visit builds up to seeing his room from the inside. The hush that fell over the crowd was palpable. In terms of visitor management, the linear design made everything culminate in that moment. Graceland wasn’t quite as good in that respect, owing to the crossing of a major intersection and the way the mansion is arranged. Still, though, from the front door to the memorial garden, the progression of the visit funneled visitors along at a comfortable pace and prevented major bottlenecks. Designing effective museums in historic sites isn’t easy, but both these venues succeeded. I hope more take their example. 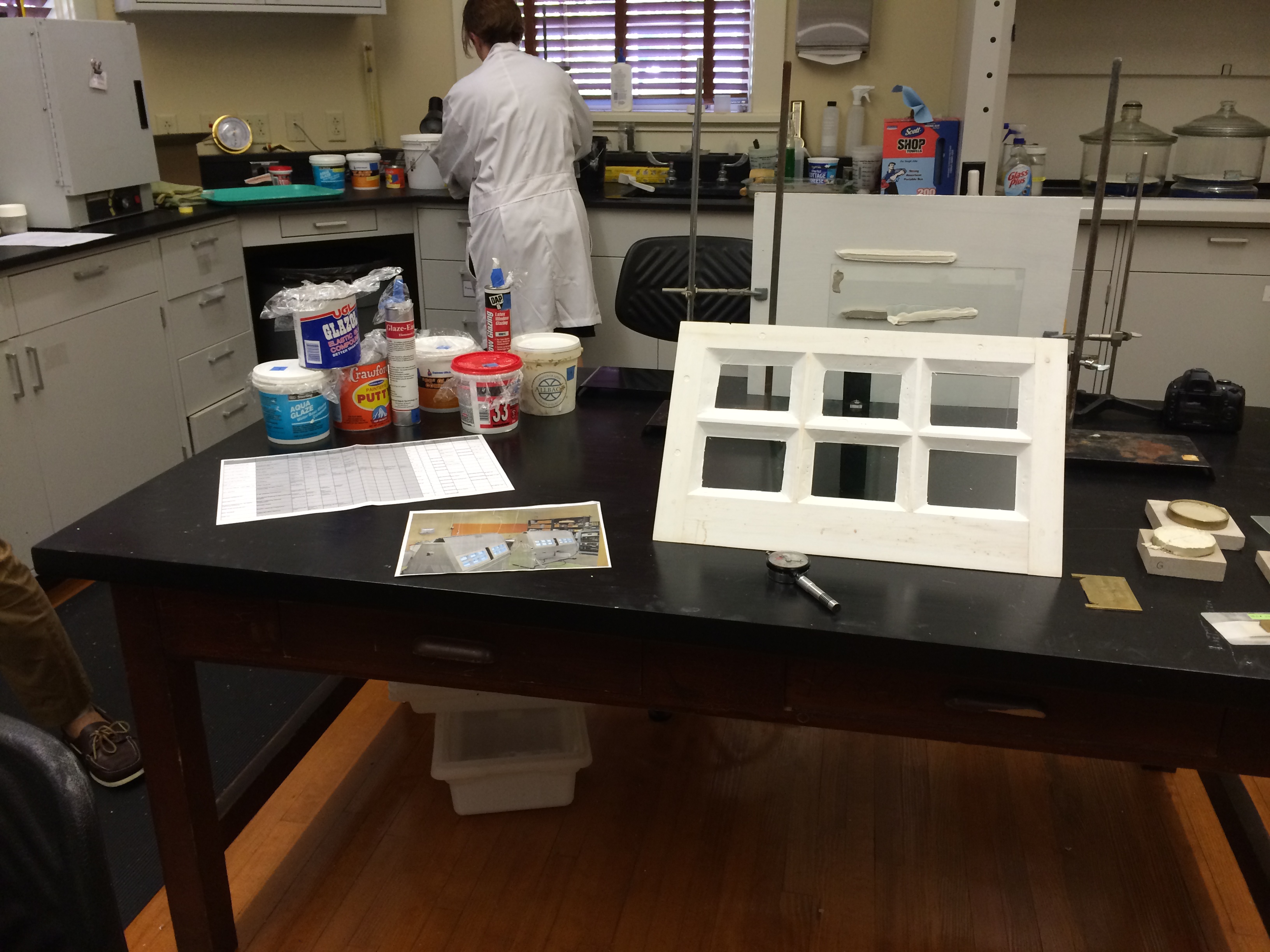 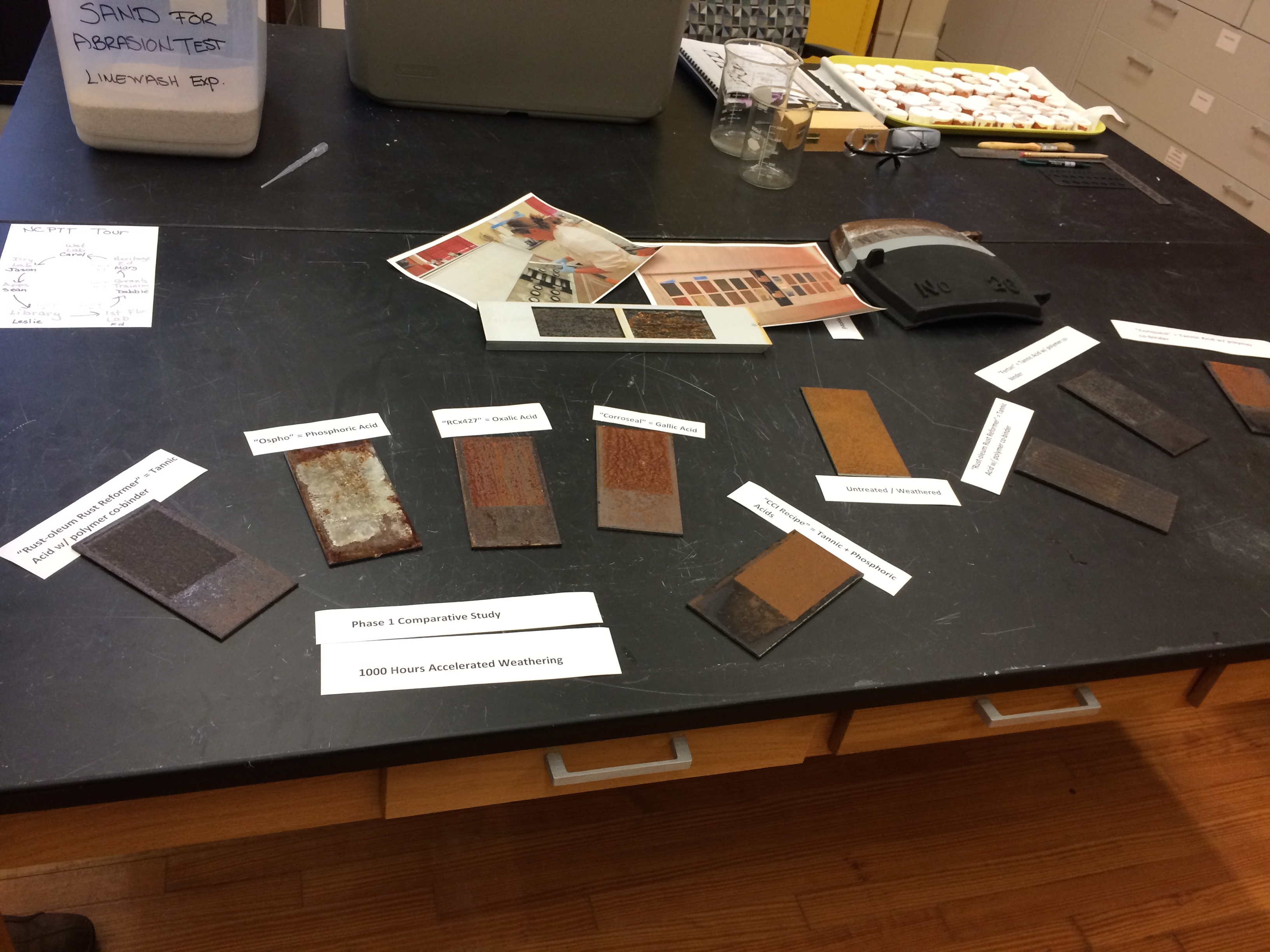 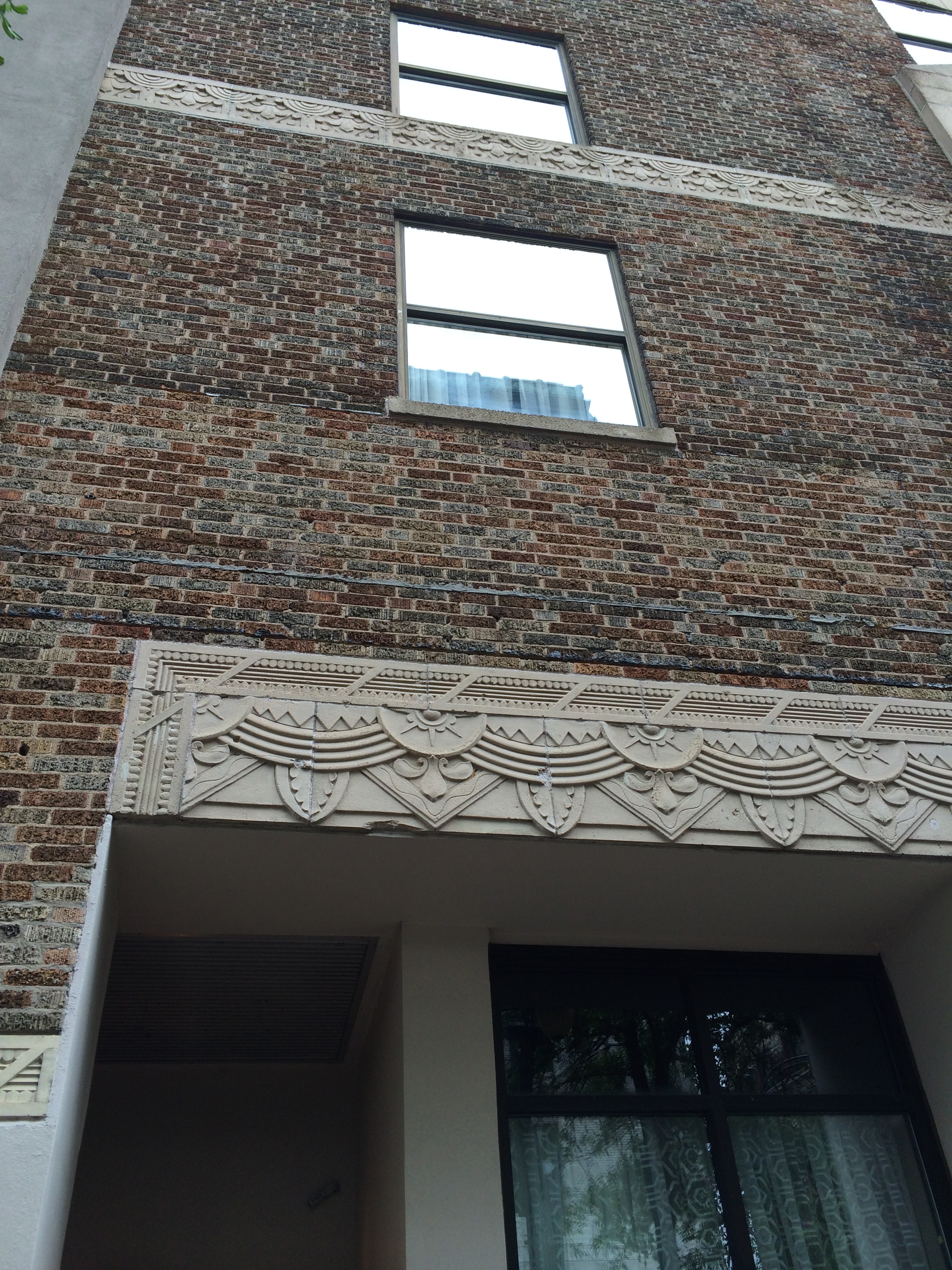 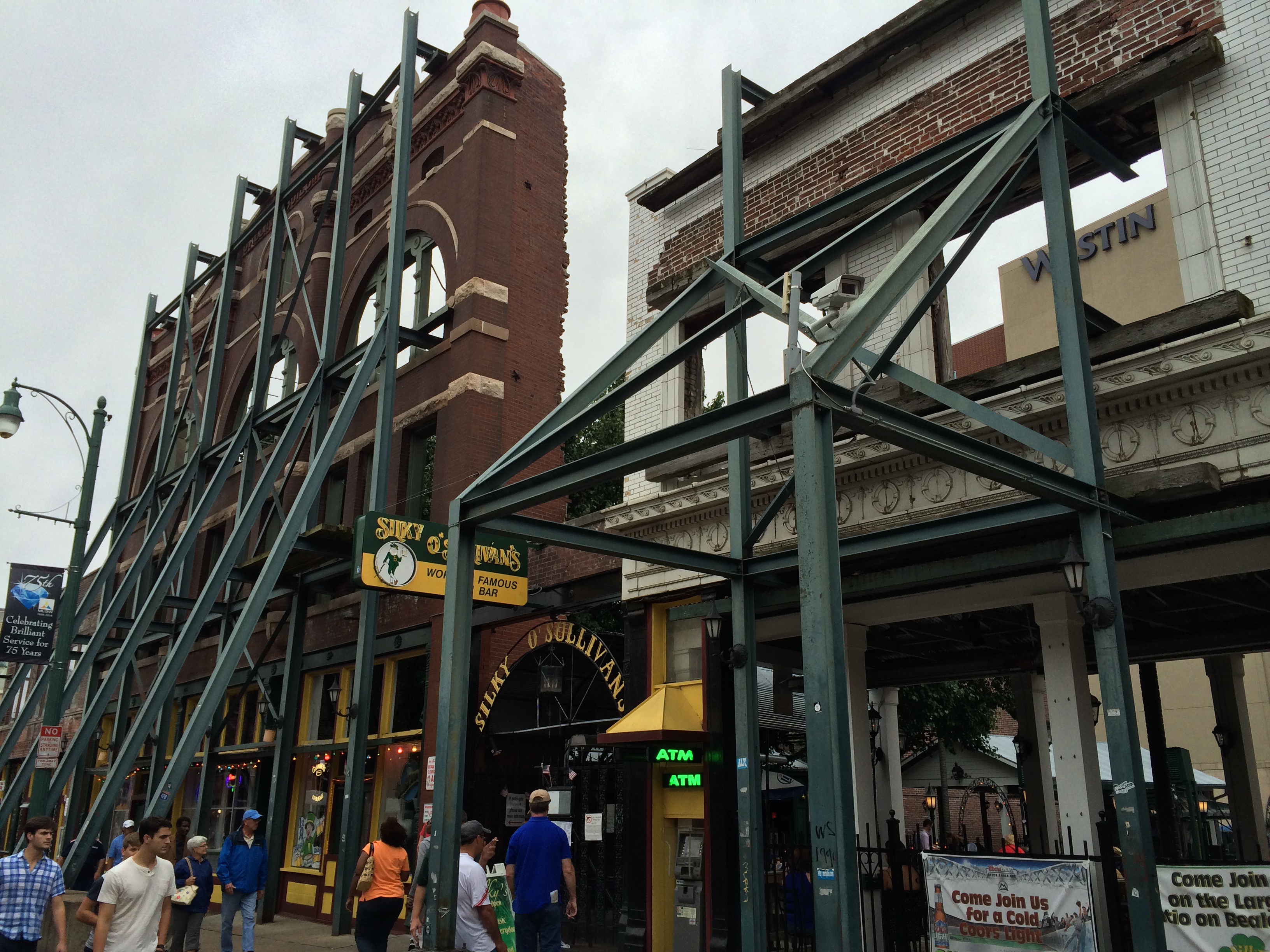 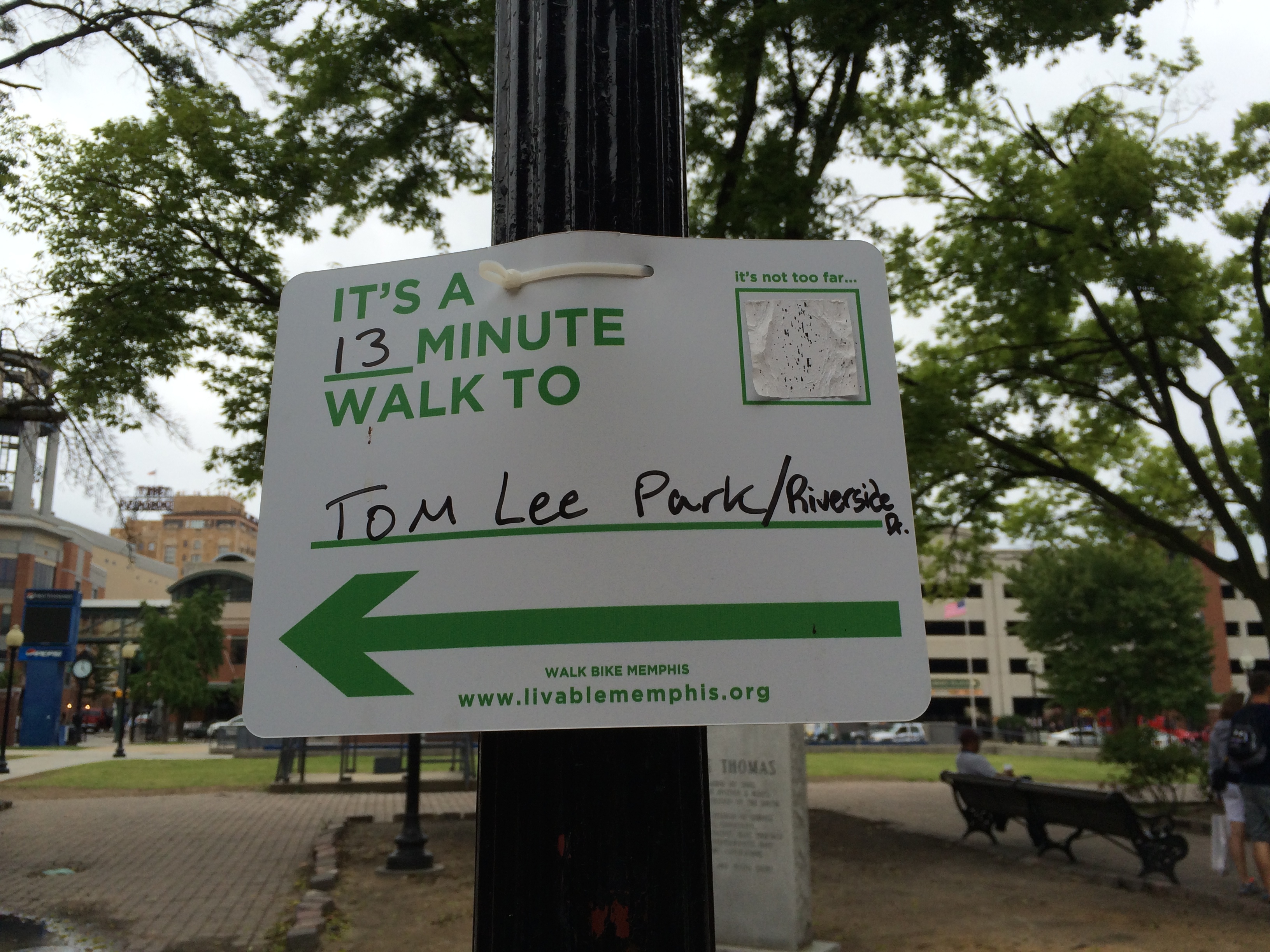 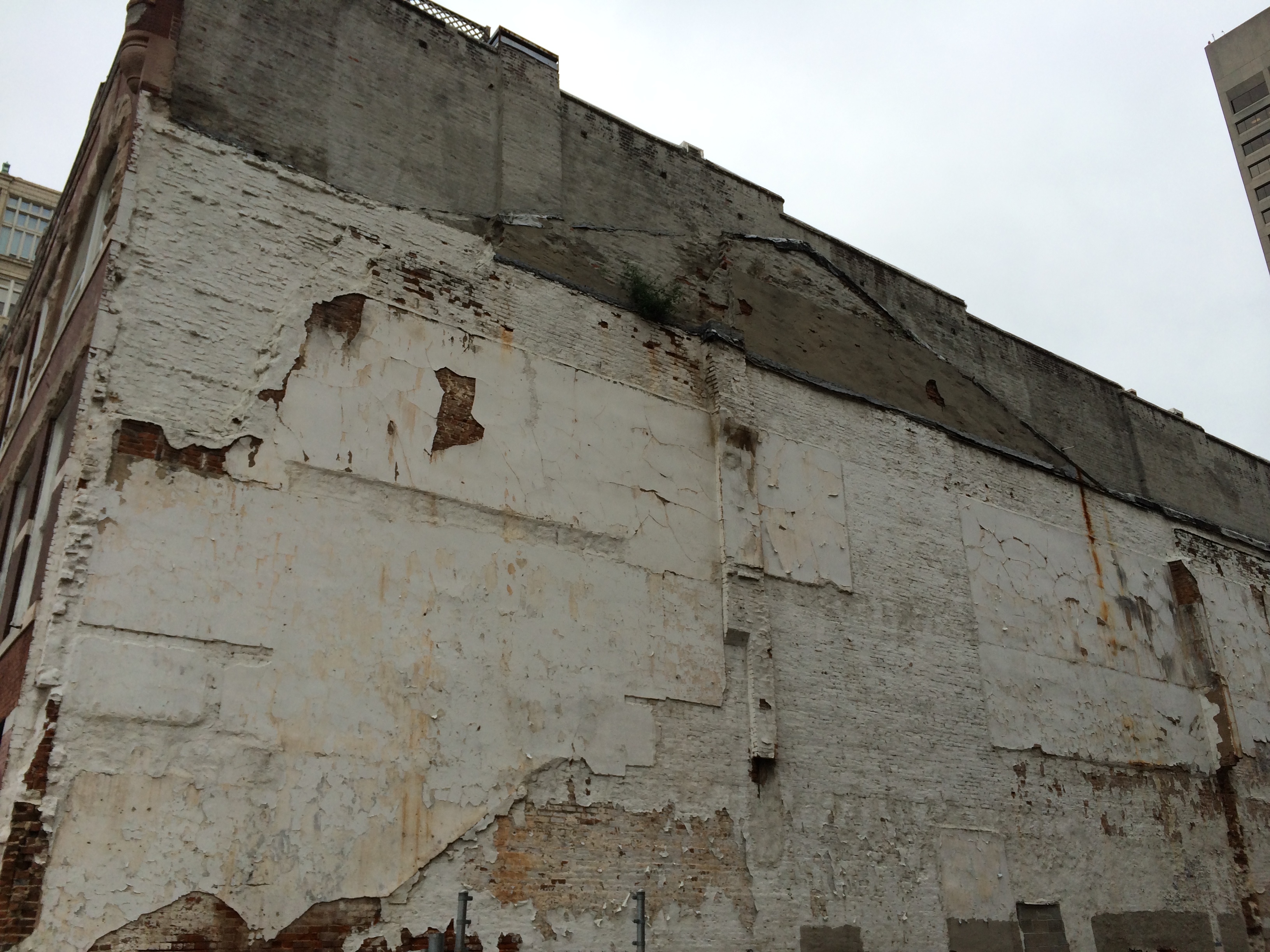 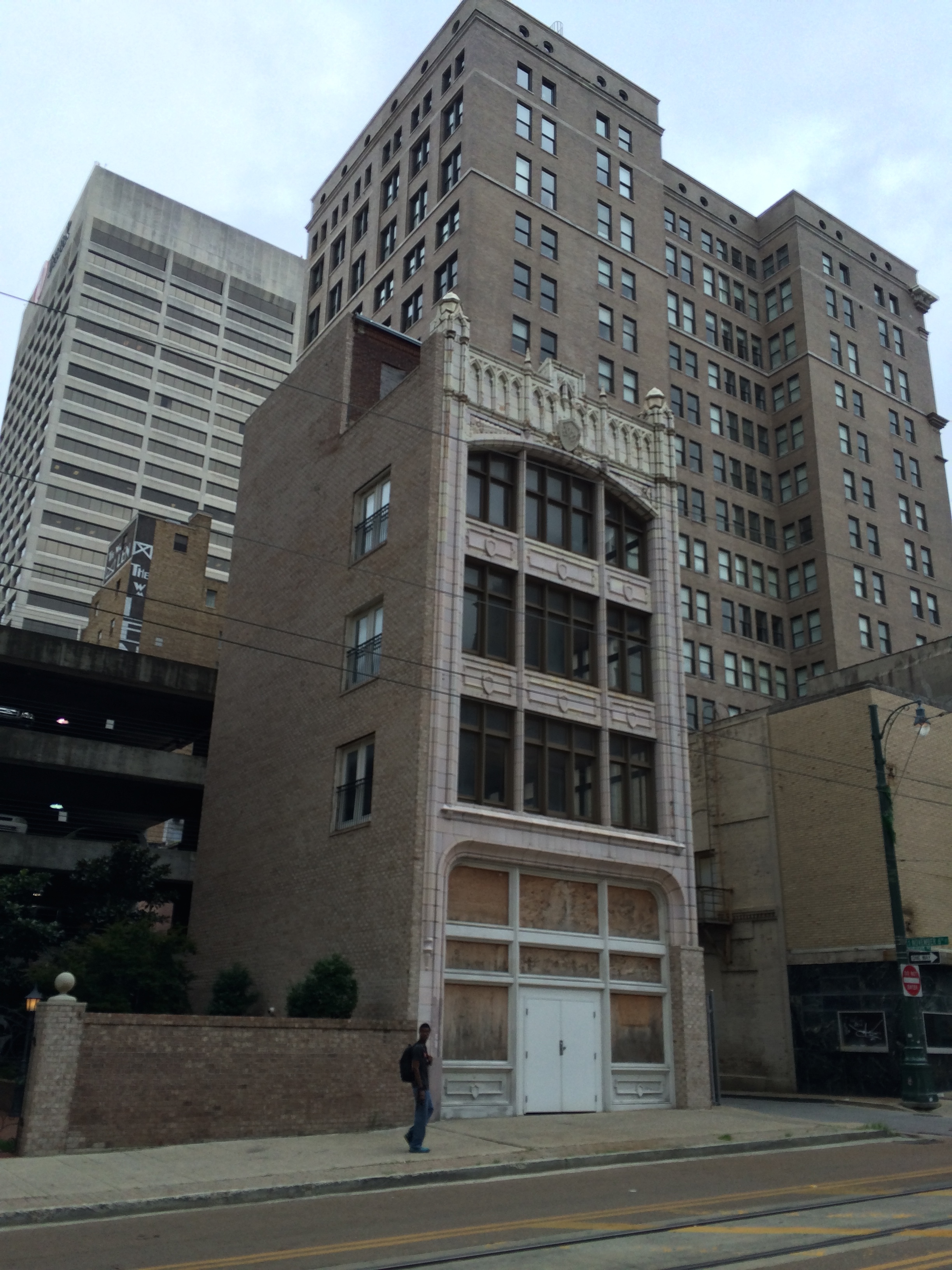 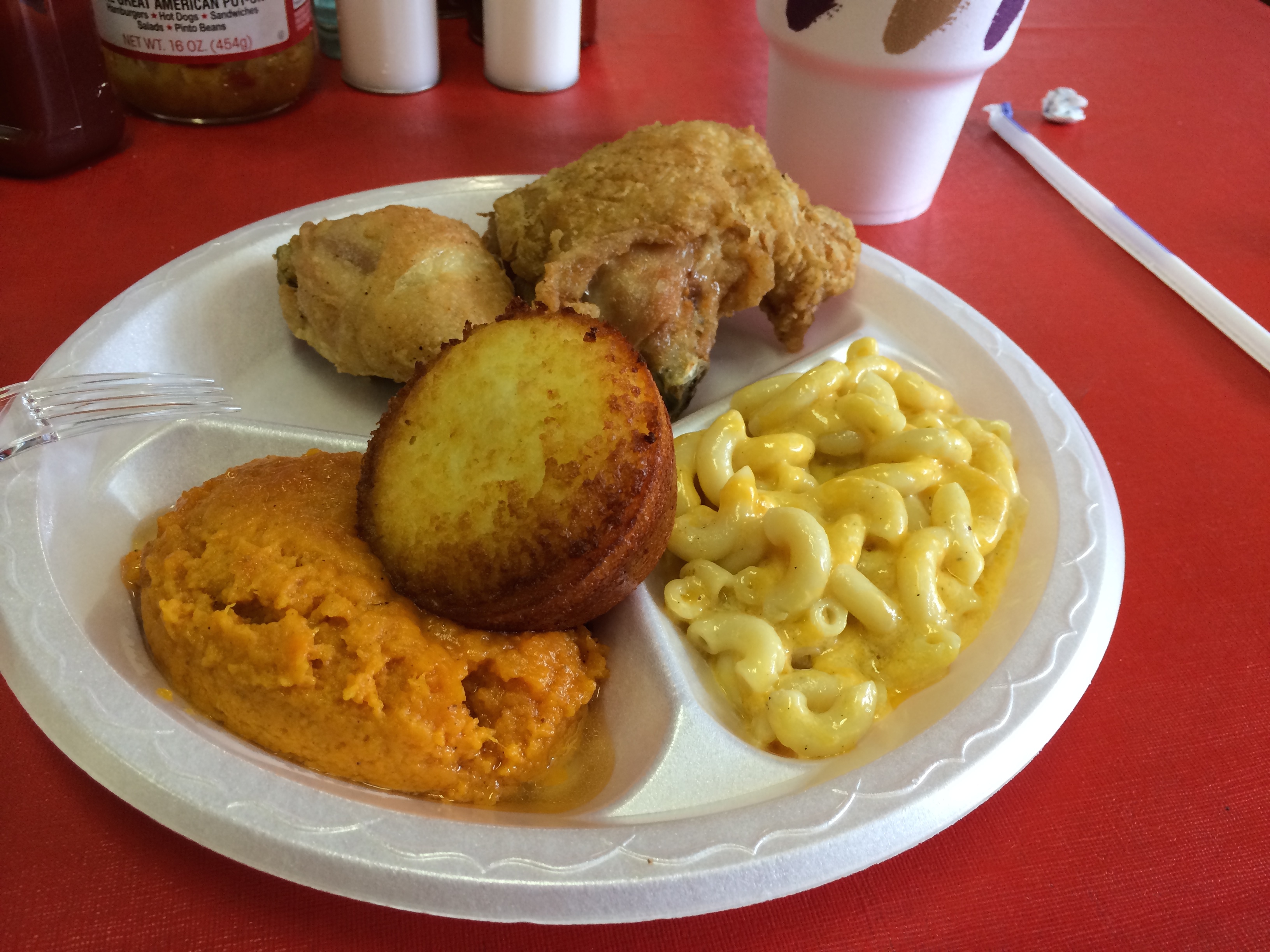 IMG_1073
Food at Weaver D's My mouth is watering just thinking about it. 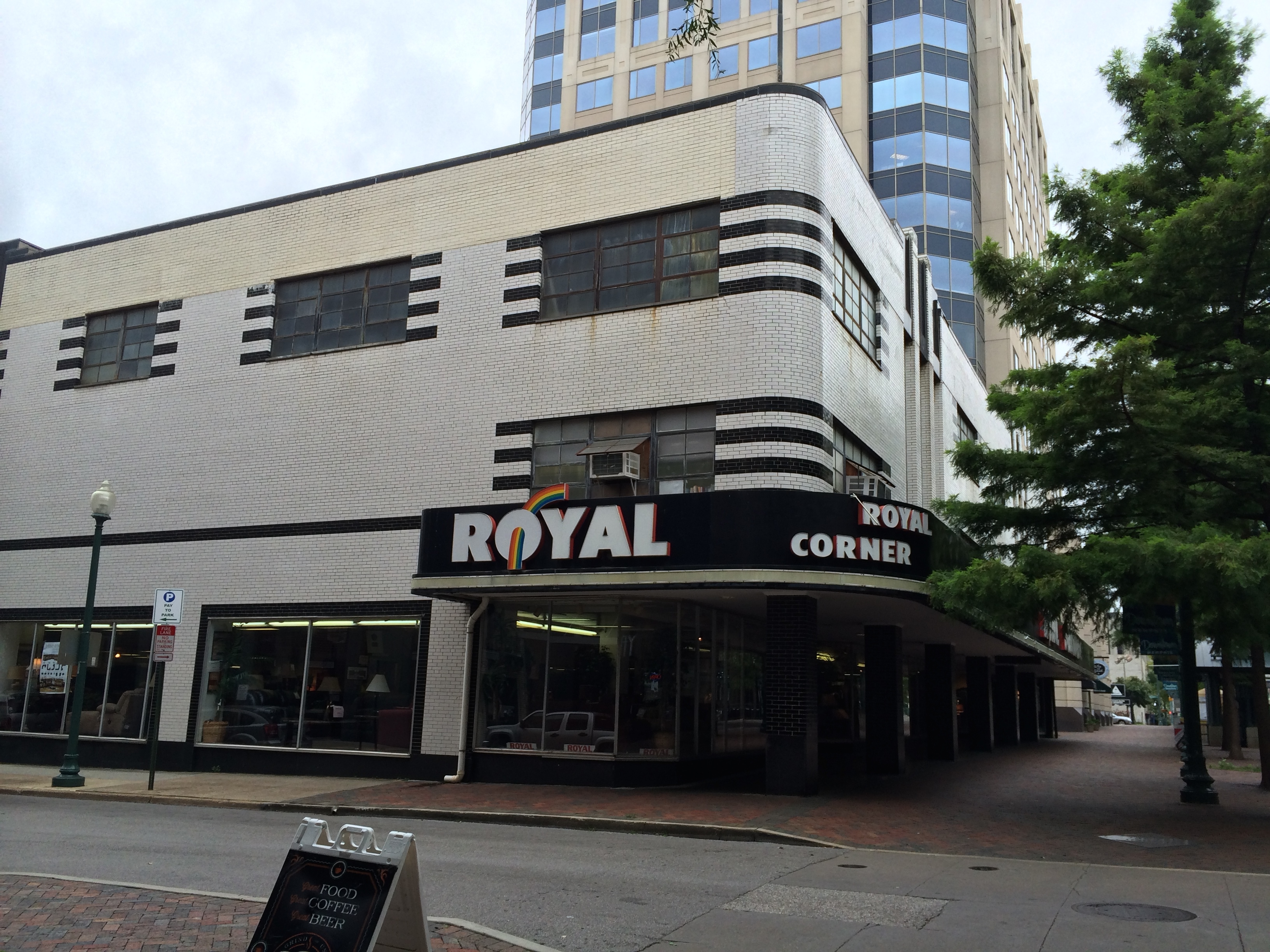 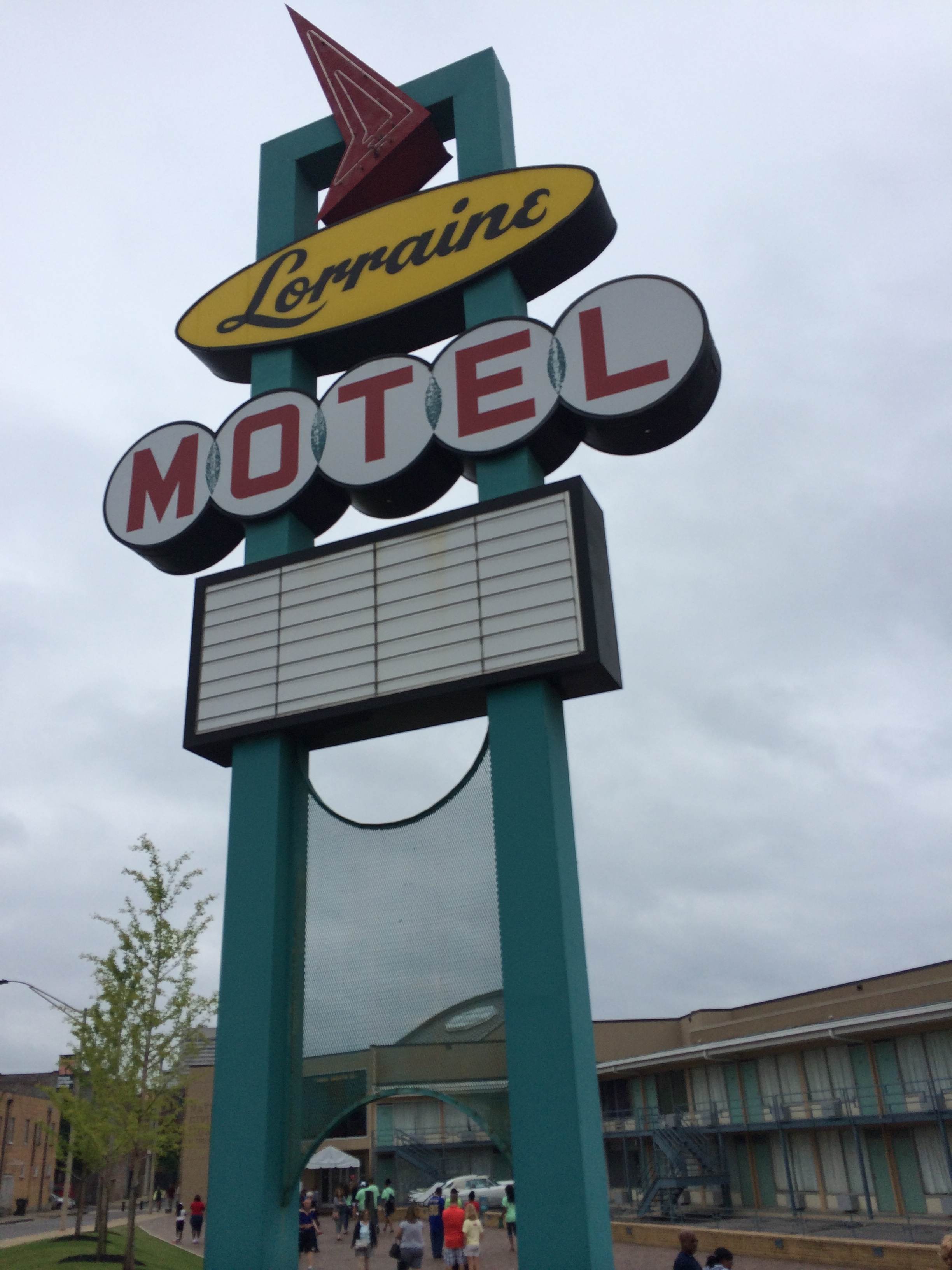 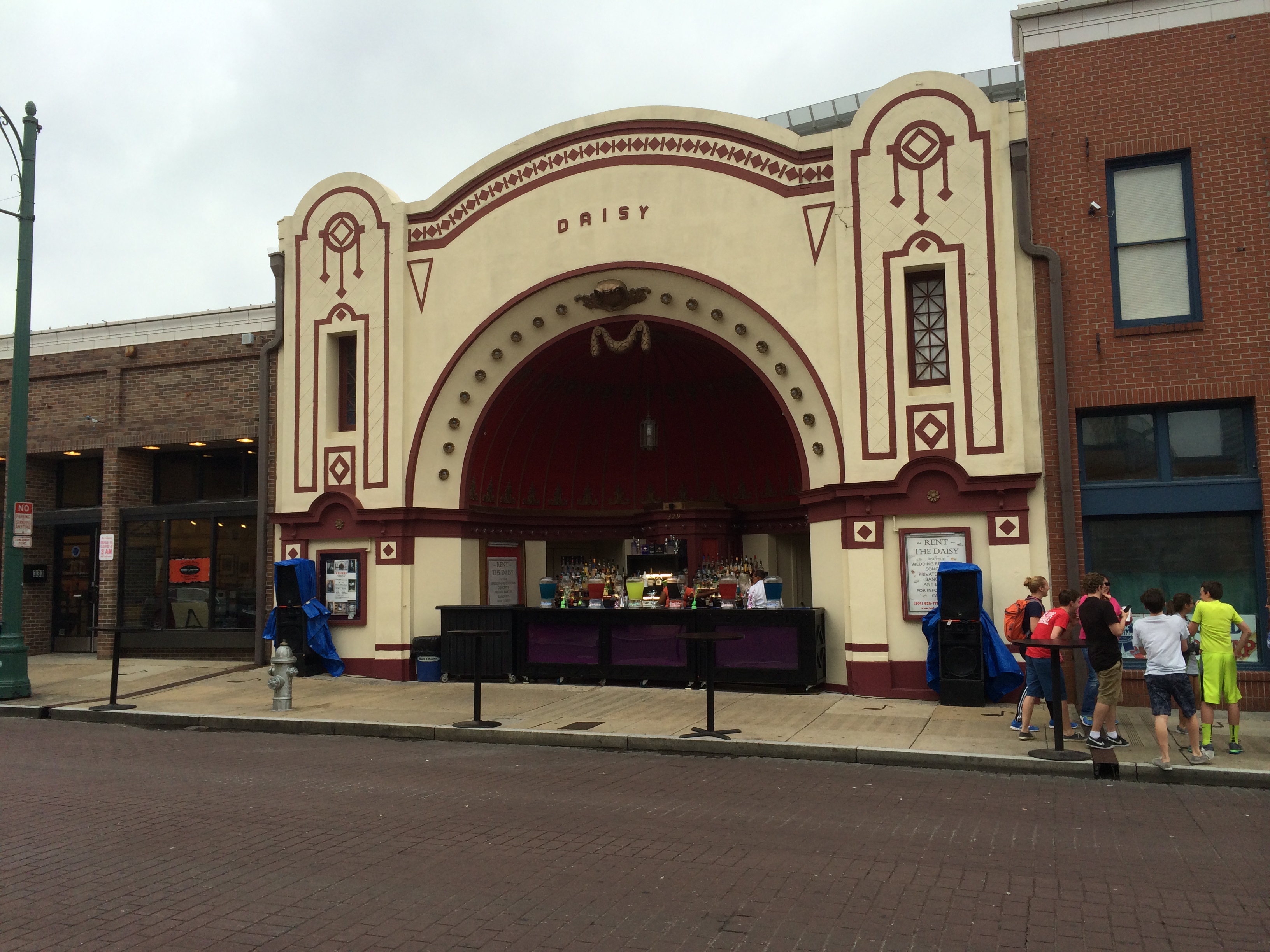 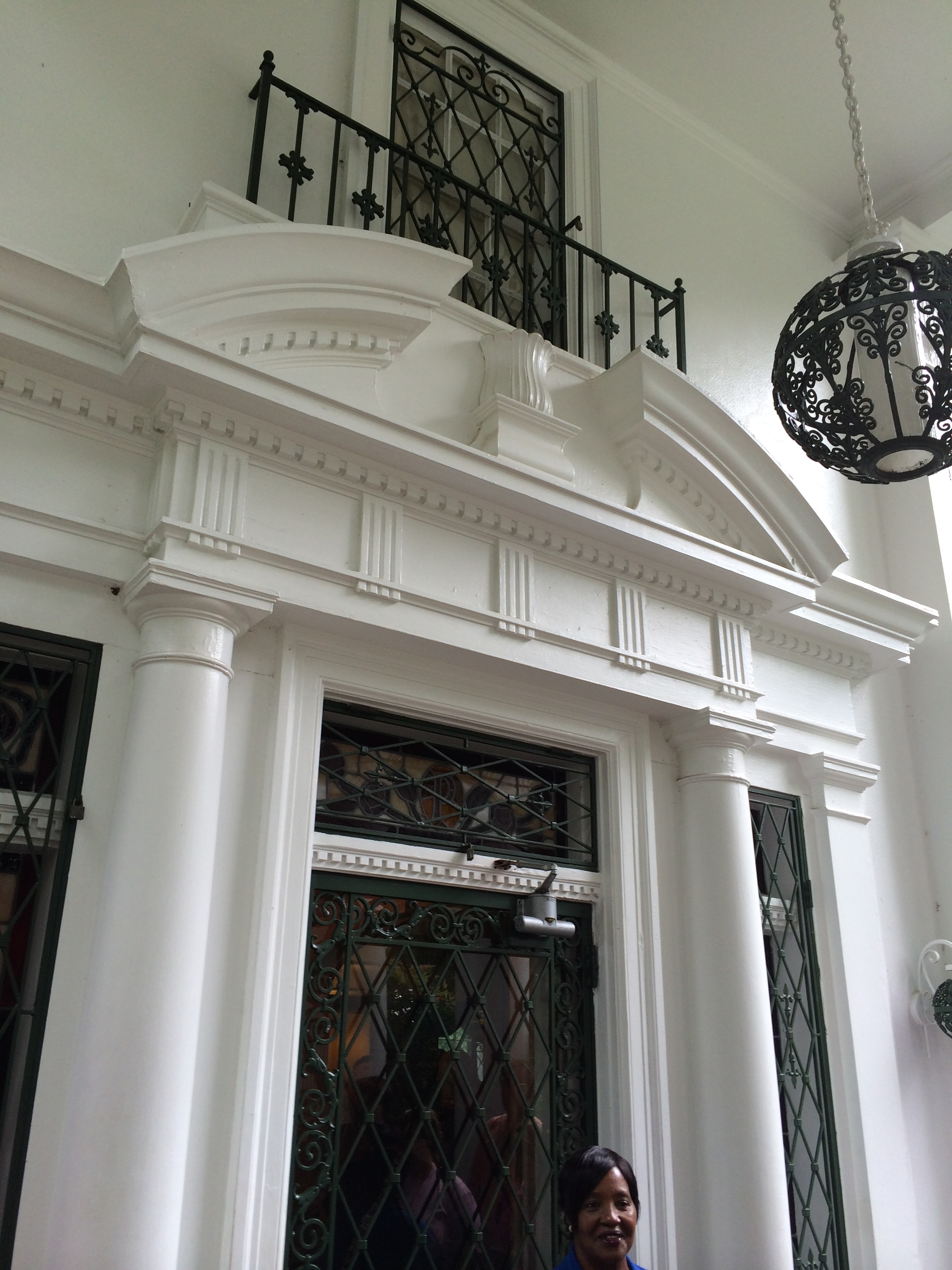 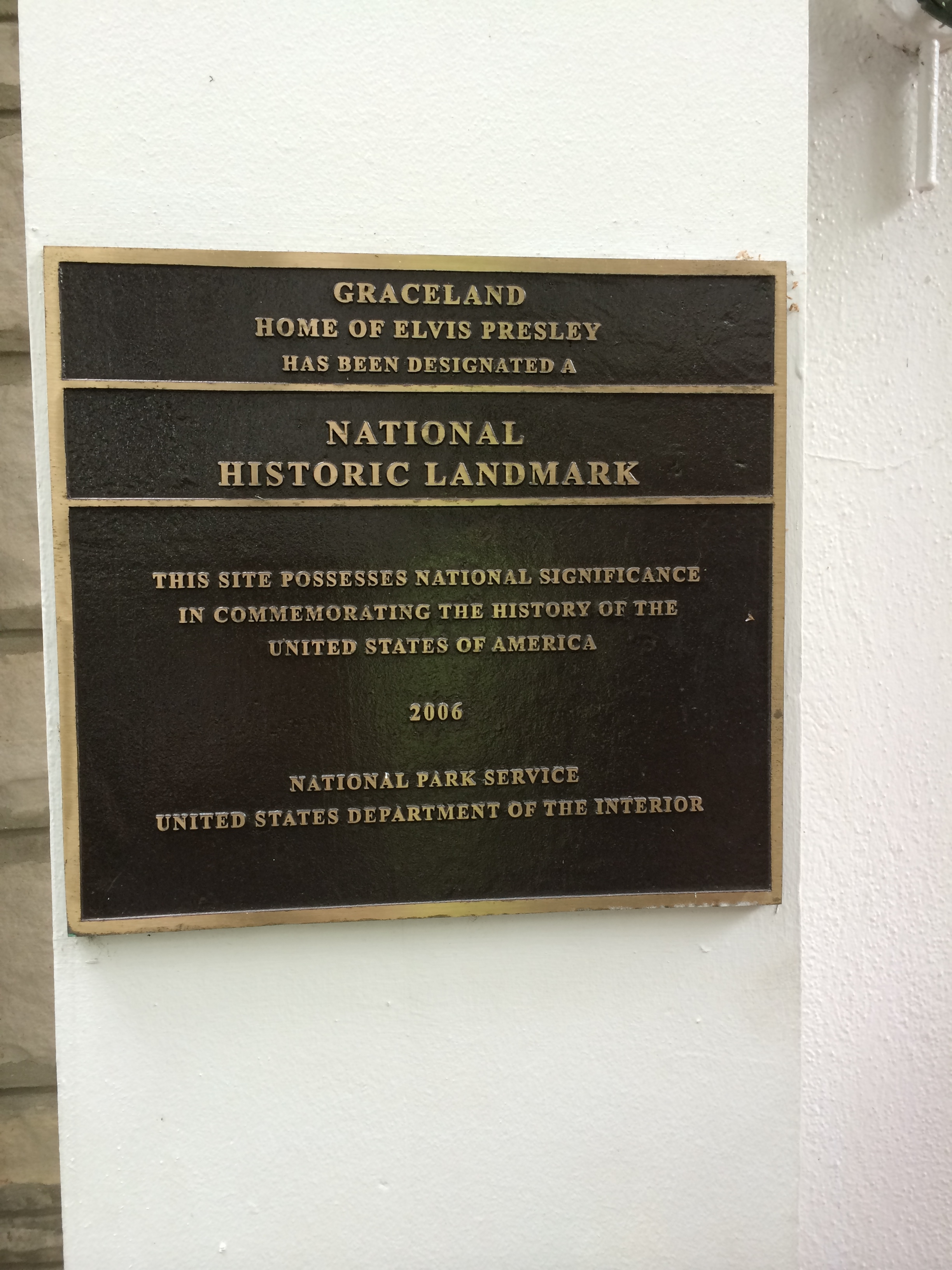 The ultimate reason for the trip: food

The point of this blog is not to make people jealous, so I won’t dwell on this. We repeatedly had incredible soul food, and BBQ, and fried chicken, until all we wanted were veggies.

Coffee was also consumed extensively. We did have a couple sad days with only Waffle House or hotel coffee, but in most places, we were able to find some pretty nice coffee shops (thank you, Yelp!). Even in the really dead towns, the coffee shops were a center of activity, with increasingly rarified hipsters on site. This made me curious: are coffee shops a good indicator of gentrification? Turns out, yes they are. As I mentioned in my last post, gentrification doesn’t have to be a bad thing. I firmly believe good coffee can only be used as a force for good. Then again, that may be because I’m a coffee addict.

The ultimate ultimate reason for the trip: the Wigsphere 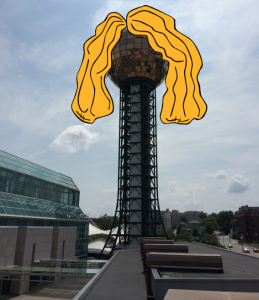 Before I found my career, before I had ever gone on a road trip in the US, back when anywhere outside the northeast was foreign to me, I watched a lot of The Simpsons. I still make lots of Simpsons joke, with ever diminishing returns. A few episodes stand above the rest, among them “Bart on the Road“. In it, Bart and a few others go on a road trip (sense a theme?) and end up in Knoxville, where they are sorely disappointed by the Sunsphere, rechristened the Wigsphere. As a planner and preservationist, I have a soft spot for world’s fairs, and this particular monument is so… unique, and 80s-ish, and weird. I’ve wanted to see it ever since. I loved it. It was the cherry atop this road trip sundae.

While road trips are possibly the ultimate American myth, they aren’t exactly part of my personal history. As a French kid, I never really got to experience it. Makes sense: from Paris, you can reach almost every corner of the country in 5 hours, and taking the train will always be faster than driving. So it wasn’t until my 20s that I went on a real road trip. I haven’t been able to go on many yet, but I’m hooked. I’m already planning my next one, and a music mix to go with it, of course.

Yes, I did live tweet the trip. It was a lot of hours on the road, ok?