Last week I went to Brooklyn and helped my sister settle into her new apartment. On a schoolteacher’s salary, she found a fantastic place, but it did need a little TLC. The week was beyond fun: sister bonding time, the world cup, an evening on Broadway, and general catching up with my old city and friends who stayed. This was most definitely a vacation – I barely even answered emails – yet it was also a great example of different parts of my life melding together. Let me explain.

I teach preservation, and I preach the gospel of new technology and learning new things. I managed to do all this *as my vacation* and have zero regrets. Admittedly, the mounds of delicious food I ate didn’t hurt (the ‘burg has almost everything I love, but sadly no bagels or bibimbap). So, what did I manage to get done in five days?
– Wallpaper
– A bunch of shelves
– Some basic IKEA-hacking
– Six lamps
– A new kitchen backsplash
Most of these were easy. I’d never installed wallpaper before, but this was a single sheet and other than causing some water spills on the floor was uneventful. Installing shelves was more annoying, mostly owing to the fact that the apartment walls are all plaster or solid masonry. It’s a good thing I brought my drill and know how to use wall anchors. The two real challenges were the backsplash and the lamps.

Let me preface this: this should have been a walk in the park. But it wasn’t. At all. Some difficulties I expected. Julia’s stepstool was too low for me to easily reach her beautifully high pre-war ceiling. Result: my arms got a serious workout. I also got to eat quite a bit of ceiling dust and deal with some old wiring. So far so good, if uncomfortable. But then the MONKEY PANTS ON FIRE sconces decided to fight me. You see, there were (ugly as sin) sconces there before, and my sister picked out some lovely replacements. We prepped the wall and put in the first sconce, turned the breaker back on, and it lit.

But then:
Me: where’s the switch?
Julia: (switches every switch in her apartment with no success. Pause.)
Julia: I can just use the breaker to switch it on an off.
Me: ?!?!?!?! NO
Julia: then what?
Me: Uh… I’ll think of something?
Which I did. But it took a while. I looked at the old sconces and found the type of switch they had on the plate, then went to Julia’s local Ferreteria (sounds better than hardware store, and they became our best friends last week!) and got outfitted. The new switches cost maybe $5 a piece. Then I went on the internet to figure out how to wire these things correctly (yay, internet!). The drill came in handy again as I drilled a hole in the plate. But then the mounting plate fought back: it’s not designed for an additional inch-wide switch on the back. I looked for others at the store but couldn’t find anything that fit. So a $7 metal-cutting saw blade and copious elbow grease were used instead to cut both mounting plates in three places. The results are pretty nice, though. You can tell the switch doesn’t quite match, but it’s minor. And I learned something new. Woohoo!

When I moved into my own house a couple years ago, I wanted a fast, cheap new backsplash and settled on metal backsplash tiles. My sister saw it and wanted the same. However, she had ceramic tile there already and neither of us wanted to try to remove that. Metal tiles can be adhered with adhesive alone, but it does take more work. Plus, the space is pretty uneven, with difficult corners throughout. Julia thought she’d install a hood where there once was one over the stove, but with the window right there it’s not necessary. I put up a shelf instead, to house the microwave. Should make for more counter space. Anyway, the backsplash install wasn’t really eventful so much as it was grueling. Those tin snips are not really designed for hours upon hours of metal cutting. Still, it came out nice, and was cheap to boot. Next time I go there, we will tackle the cabinet faces and hardware. It’s nice to have more projects to look forward to. When all was said and done, we Facetimed with our mom who was appropriately impressed. She asked something I hadn’t really thought of myself:

Where did you learn how to do all that?

The answer is: nowhere and everywhere. Trial and error. The internet. Reinventing the wheel. Brainstorming. No one will mistake my work for a professional’s, and it takes me hours to solve some dumb problems. But I’m a firm believer in the McGuyver system, though I call it by its more vulgar french term: Système D (the D stands for “démerde”. Look it up.) It’s not like any of this stuff is hard, per se. It’s more just unfamiliar to most people. Luckily for me, the internet has made it easy to get free tutorials, some of them illustrated or even videotaped. This then provides confidence, and the success at one project breeds confidence for the next one, etc. Before last week, I didn’t know how to retrofit a switch in a lamp or install backsplash without nails. Now I do, and will feel less nervous trying new things next time around.

It was wonderful to see what one week of sweat equity can add to a place. In my classes I teach about the value of this: how it builds sense of ownership, how it increases well-being. Well it did it for me, and more importantly it did it for my sister too. The day after I left, she was inspired to repaint her kitchen, completing a pretty impressive transformation. All for less than a couple hundred bucks. 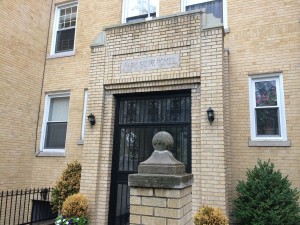 In my classes, I also discuss the different faces of gentrification. Runaway gentrification is a very bad thing: it alienates and displaces the local community, and eventually destroys the identity it co-opts. On the other hand, slow and controlled gentrification can be a force for good. It gradually improves quality of life in a neighborhood without shutting out existing residents. My sister’s new neighborhood is a working-class hispanic enclave. As others have noted, it’s been bypassed by the aggressive gentrification that has affected much of Brooklyn in the last decade. When we were walking around, my sister worried that she would become the face of Sunset Park’s gentrification. But I don’t think so, or at least not in the negative sense. Julia is a civil servant in the very community in which she lives. That’s exactly what planners aim for: it fosters culturally sustainable, vibrant places. If she lived in Sunset Park to commute to a barista job in Park Slope while waiting to make it big in the art world, that would make her a hipster caricature. But she doesn’t. Instead she says hi to her middle-school students as they walk down the street.

When Julia’s lovely masonry apartment building was built in the 1920’s, it was named “Park Slope Homes”, which is… inventive. The building is a solid 20 minute walk from the southern edge of the Slope. I can understand the desire to sell to a more upscale clientèle, but any sense of inferiority is hopefully now buried. The Slope has more variety of businesses, it’s true, but Sunset Park was lively and welcoming: people were strolling at all hours, storefronts were colorful, and a taco truck was parked a minute’s walk away. I think my sis will be happy there, and will keep giving back to the community. As for me: I got to relax, bond with my sister, and even reinforce my core beliefs in my work in the process. Looking forward to visiting again soon, with tools in tow.