Skip to content
Posted on August 4, 2015August 4, 2015 by admin
I just returned from Paris, and am currently wallowing in the joys of being home. Oh, Soup & Taco, how I missed you! Most of the classes I taught in Paris are of things I know very well: I’ve been to all the museums dozens of times each, and visited some places on a weekly or even daily basis as a kid. So: nothing new there. This time around, though, I did see two new things I’ve never experienced before. My brief thoughts about each are below.
Le Corbusier Exhibit at the Centre Pompidou
It’s not everyday there’s a serious architectural exhibit at a museum I love. I was lucky enough to catch this exhibit in its last days in Paris. My overall review of the exhibit is twofold: the practical and the thematic. 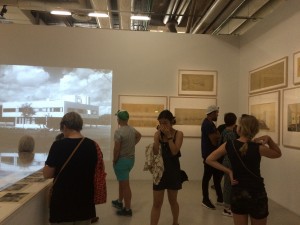 From a practical perspective, I thought the exhibit did a great job overall. It’s not easy exhibiting buildings in a few museum rooms. Do you just have drawings? Models? Other stuff? The exhibit mixed and matched lots of media to minimize the boring flat-stuff-on-wall potential. Walls were used to project vintage movies, some models were mounted on other walls, and books were exhibited effectively in islands. My one complaint about the layout: the color of Le Corbusier’s work was not emphasized. Nowhere was that more lacking than for the section on Notre Dame du Haut. The church is a masterpiece of Brutalism, largely, in my mind, because of the way light filters through the holes in the walls, many with stained glass. But that aspect is completely lacking from the exhibit. Too bad. 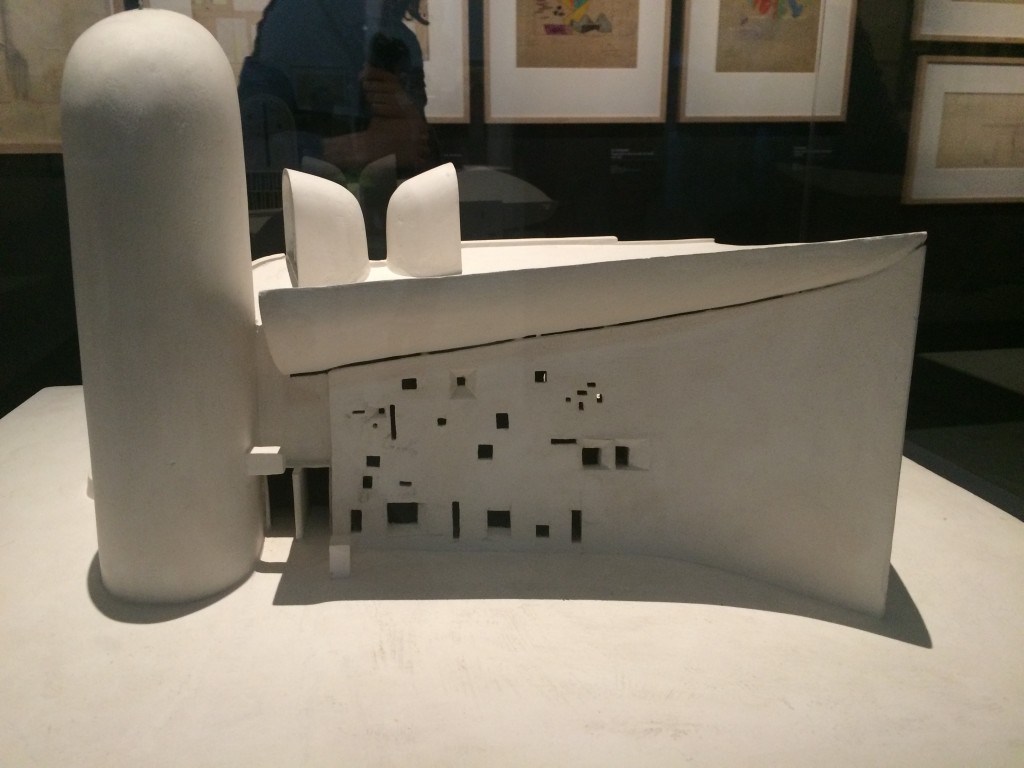 The much more serious flaw in the exhibit, though, was thematic. Le Corbusier’s fascination with order and “the machine for living” is inextricably linked with his fascist leanings. While I understand not focusing solely on this, not even discussing it is problematic to say the least. For one, it’s an important puzzle piece to understand Le Corbusier’s design aesthetic. Furthermore, it’s crucial to make any kind of judgement on the arc of his career. Plenty of other designers and architects are openly associated with their less-than-savory political leanings. Why not Le Corbusier?
Overall: I was disappointed with the exhibit, but very glad I got to see it. Not sure where it’s going next, but I suggest a (thoughtful, skeptical) visit if you get a chance.
Luxembourg City
When I told friends and family I was taking my class to Luxembourg, the universal response was: why?!? The answer: I wanted an architecturally interesting place not too far from Paris, accessible via train, and had already been to Brussels and London. So: Luxembourg. Turns out it was worth a visit, though I’m glad we only stayed one day. Beyond that, the banking-centered city would be pretty boring, if still scenic.
First impression of Luxembourg: Germanic. Once we left the train station, the characteristics of the city became clear pretty quickly. The location of the city is one that can be directly traced to its geography. The river gorge and cliffs provided great defensive advantages, and generations took advantage of that, from Roman days through cannon fire technology to the 20th century. The city was pleasantly walkable if very hilly. Little to no urban renewal has taken place in the old city, leading to narrow, cobbled streets and a mostly car-free experience. The architecture was definitely more gothic than Paris, which is to be expected for a duchy bordering Germany and France. A couple architectural sights were particularly noteworthy:
The Luxembourg City Museum was fantastic first and foremost in its layout and design. The museum is an adaptive reuse of an existing building, and extends from caves in the bedrock up multiple stories. Glass and steel were very effectively integrated, as were a couple of scenic elevators. The exhibits were generally pretty good, if a bit oversimplified. Multiple wooden models of the area took the visitor through the history of the city, beautifully showing its growth over time. On the other hand, the history was whitewashed a bit too much for my taste. Nazi history was confined to a single back room, and resistants highlighted more than collaborators. Considering Luxembourg’s “neutrality” through WWII, I’m not sure trying to sweep the bad under the rug was effective. 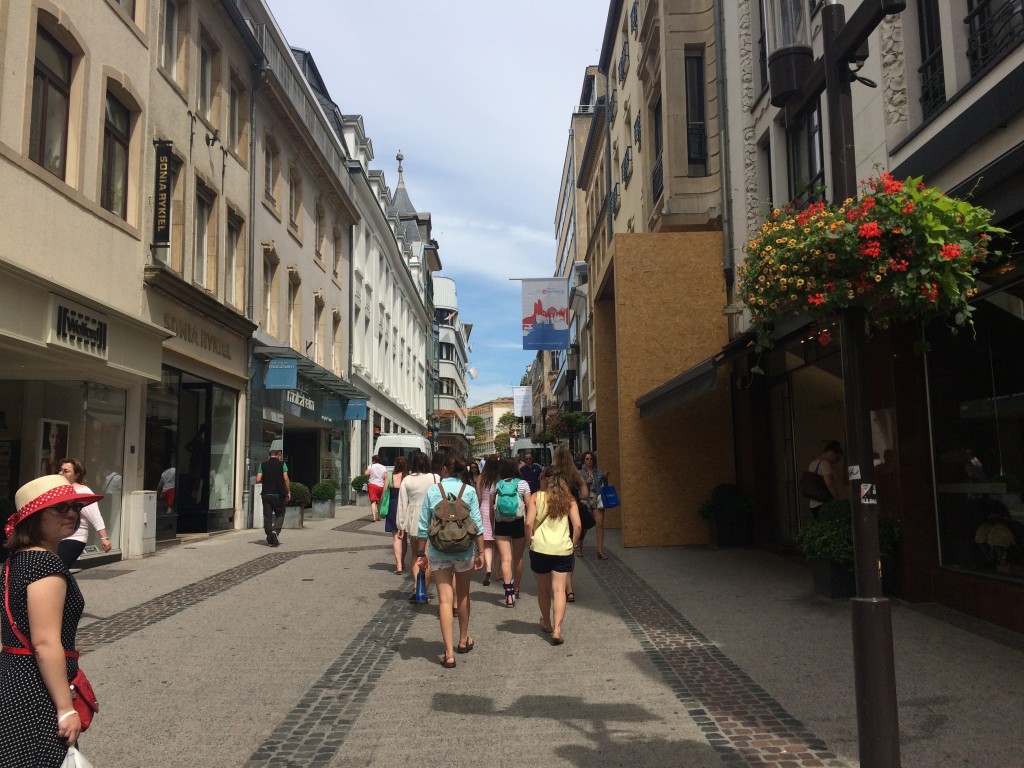 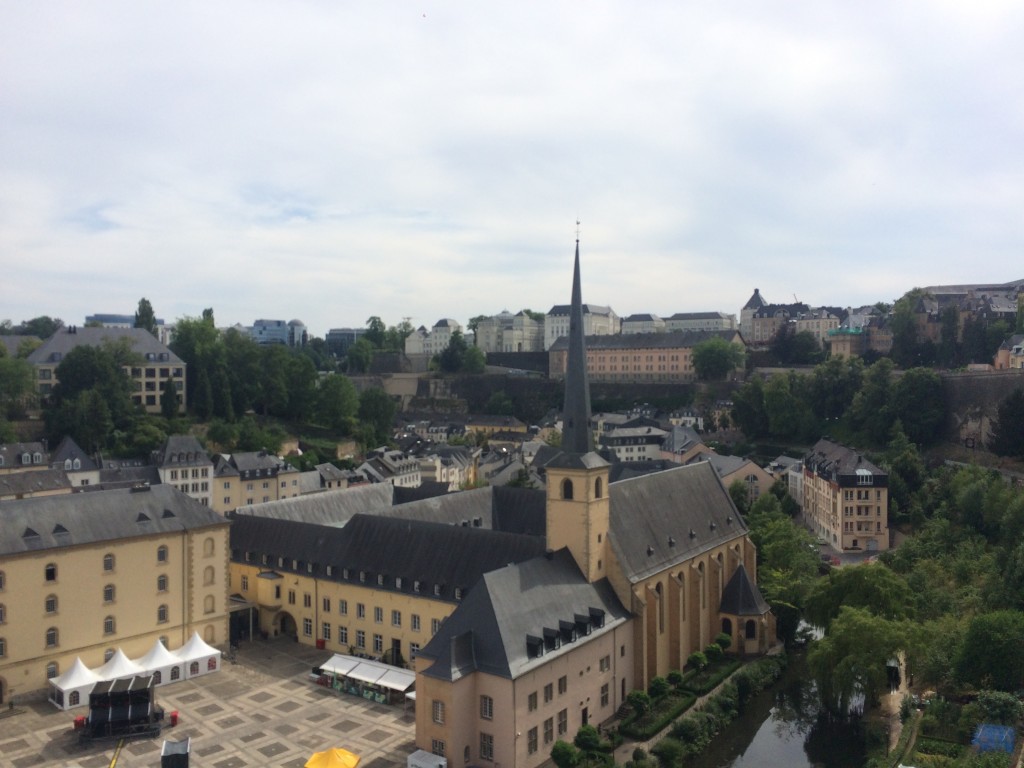 After the museum, we walked around the city, particularly the fortifications. While we didn’t have time to check out the inside of the casemates, the top of the fortifications were pretty amazing on their own. My one regret is that the bridge I really really really wanted to see was in the middle of rehabilitation and therefore was completely wrapped up. I pouted for a bit, but the rehab, if nothing else, was a great lesson in preservation public relations. A URL for more information on the rehab is printed in giant letters on the scaffolding, and there’s a mini-museum set up in a shipping container right next to it to explain the history of the bridge and the work being done. Pretty neat!

Maybe someday I’ll return to the city and see the bridge in all its splendor. Then again, as my students said: You Only Luxembourg Once.

One thought on “Beyond the childhood haunts”