Urban planning has an antichrist. His name is Robert Moses. He was larger than life: he built parks, roads, and a ton of buildings all around New York State, was in power for over 40 years, and for a while held over a dozen offices. Why antichrist? Well, when it came to NYC, he served the god Automobile over all others. He cut highways through once-functional neighborhoods, he fought viciously against public transit, and then tried to criss-cross Manhattan with even more highways. On top of it all, his haughty, cavalier attitude makes him easy to hate. A few choice quotes: “Let’s be sensible. How do you visualize the area that we cleared out for the Fordham expansion downtown? They needed the space. Now I ask you,what was that neighborhood? It was a Puerto Rican slum. Do you remember it? Yeah, well I lived there for many years and it was the worst slum in New York. And you want to leave it there?” “I raise my stein to the builder who can remove ghettos without removing people as I hail the chef who can make omelets without breaking eggs.” “Cities are for traffic.” “Those who can, build. Those who can’t, criticize.”
Charming.

In addition to being memorialized all over New York, Moses was also the subject of one of the seminal books of urban planning: The Power Broker. If you’re into biographies, you may have heard of its author, Robert Caro. He is, bar none, the best biographer I have ever read. He is exhaustive. He is comprehensive. So although his prose is fluid and a pleasure to read, the 1200 brick that is his Moses biography is a tough sell. Ok. More like: “Read THIS?!? Nope.”

So when one of my current HISP209 students shared another option for learning about Moses, I all but shouted with glee. A comic about Moses’ life could solve the two intractable problems with Caro’s opus (1) it’s not a giant dense brick of information and (2) it mentions Jane Jacobs. Yeah, have I mentioned this yet? The Power Broker doesn’t cover the antagonism between Moses and Jacobs. Apparently Caro wrote the chapter but then cut it out when the manuscript got too long for comfort. Why he cut this in particular, I’ll never know. That is one conflict anyone interested in planning history needs to know.

So when I found out about this graphic novel I thought it may be an answer to my prayers. Moses v Jacobs? Check. Not 1200 pages long? Check. Pretty pictures? Even from the web I could tell that was a resounding check. I breathlessly waited for the book to be delivered, and then cracked it open with relish. And then…. Sad trombone.

I wish I could tell you it’s good. Or even just okay. After all, it’s not a 4-inch-thick magnum opus. I wasn’t expecting it to be. What I was expecting was a book worthy of France’s long tradition of graphic novels (did I mention the authors are French?) But, non. Eet eez terryble! A compleet waste of time. The flaws are numerous and they keep coming:

– There is a complete lack of narrative thread. Instead, the book consists almost entirely of vignettes and lists. Any “story” focuses on society ladies or other irrelevant stuff. And for a book subtitled “The Master Builder of New York City” precious little actually takes place in NYC.
– The pictures of buildings are gorgeous, but the people are often unrecognizable and inconsistently drawn. So even if there was a narrative, it would be really tough to follow.
– The tone is as inconsistent as the drawings. Is Moses a villain? A hero? Are people suffering or is this a flapper-era romp? The authors can’t seem to decide. Maybe they were trying to be neutral, or undo the generally accepted view of Moses as a villain. But really all we get is disjointed facts: he was discriminated against at Yale because of his Jewish background (Boohoo! Maybe you shouldn’t have chosen the Slytherin of the Ivy League) but then basically hated Jews anyway. He built housing Blacks weren’t welcome in but his pools were technically not segregated (not mentioned is that he built most parks and pools in non-Black neighborhoods.) You get the idea.
– the fact that Moses didn’t drive but built lots of highways is repeated four times in just over 100 pages. Now I’m all for emphasizing important stuff but at some point, you’ve just over salted your steak.
The last nail on the coffin is the ridiculously bad English. I really have to wonder how this book even went to press. There are grammatical errors, spelling errors, sentences that make no sense. I asked my husband to read this and his first comment was: “what language was this written in?!?” As a native French speaker, I’m baffled at how bad the writing is. It’s not like there aren’t LOTS of people who can translate French into English. Or, you know, proofread. 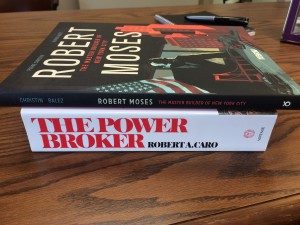 So: if you want to read a good graphic novel relevant for urban planning, you can try lots of other French titles like La Foire Aux Immortels by Enki Bilal or anything by Sempé.

But if you want to learn about Robert Moses, just bite the bullet, invest in a bookmark, and tackle The Power Broker. You’ll actually learn something, and believe it or not, you’ll enjoy it. Plus, that book will develop your arm muscles.