You know the expression: “this is the [fill in the blank] bible”? In preservation, the bible is A Field Guide to American Houses. Sure, there are other books. Some would argue that Roth’s Understanding Architecture is more detailed and nuanced. Others – me included – would emphasize that McAlester is incomplete, since it only includes houses. Still, those are quibbles. Every preservationist owns this book. My own copy is well worn. I got it before I even started my masters degree, back in the 90s. I’m unreasonably proud of this, like I discovered the book or something.

Anyway, after 30 years, Virginia Savage McAlester wrote an updated edition of the book (the original edition was co-written with her husband). It came out last year, and of course I immediately bought it. I should have written about it sooner, but got distracted. I have to thank (UMW HISP alum) Kaitlin O’Shea for inspiring me to write about the new edition with her instagram. Thanks, Katilin!

The things you should know about both editions of the book are that (1) it’s an incredibly useful, thorough, beautiful book and (2) you should own it, use it, and be thankful for it.

Ok, so I ♥ this book. But there’s more to it than that. The new edition drives home the incredible strengths of McAlester’s work, and also a few quibbles (what? You thought I wasn’t gonna complain at all? Fat chance.)

First, the good: the research is unquestionably thorough. Photos are clear and well-framed. McAlester distills styles very well, and parses them in ways that are practical. The book is also beautifully and practically designed. For each style, McAlester starts with a line-drawn sketch of the major stylistic features. The sketch, while undoubtedly inspired by real house(s), is both clear and not recognizably a specific place. McAlester then uses photos of actual examples to emphasize stylistic elements and variety within the style. I can’t emphasize enough how important it is that she chose to use BOTH sketches and photos. Books usually stick with one or the other approach – for stylistic consistency, I wonder? – but each is incomplete on its own. By using them together, McAlester allows the reader to both understand the Platonic ideal of each style but also the declinations found across the landscape. [I chose not to include pictures or sketches in this post because honestly you should just buy the book. Seriously.]

OK, now about those quibbles. The first, which ranges across both editions of the book, is the parsing of styles. However, there’s not much to be done about this except be aware of it. Where does one style stop and another begin? What’s a major versus a minor/sub style? What marks the start and end of a stylistic period? By necessity, McAlester makes choices, and probably all of them could be questioned. That’s ok by me: architectural history is not a science. Again, if anything, her choices could be the springboard for a myriad fascinating architectural debates. So far, so good.

Alright, but I do have two complaints that I think are more deserved, and are related. The one limit of McAlester’s original edition of the Field Guide is that it only includes houses. The choice to limit the book to houses made sense: they are a distinct type of construction, and are much more numerous than other types of buildings combined. However, the new edition, beyond adding styles up to the present, also has a new chapter about neighborhoods. This is, might I add, a very good chapter, with glorious illustrations of street network, setbacks, scale, etc. If you’re going to distill urban design into a single chapter, you could do much worse. The problem is, you really shouldn’t be distilling this to a single chapter in the first place.

Since the Field Guide focuses on houses, the chapter all but ignores downtowns and commercial arterials in favor of residential neighborhoods. It makes sense to do that, but gives the reader a fragmented, biased, incomplete view of urban design. This brings me to the second issue: I don’t understand why the new edition chooses to add the neighborhood stuff but not other stuff that’s also related to styles of houses, namely: other buildings that are not houses (guess what? Churches and factories and skyscrapers are all related to housing styles as well.) and landscapes (like parks, for instance, which are ALSO related to houses.) 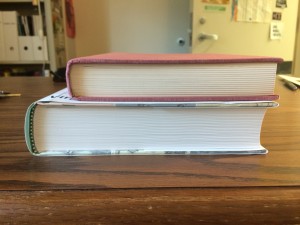 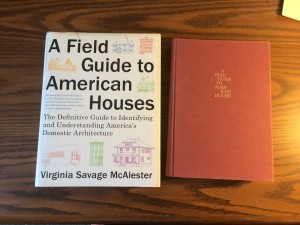 If McAlester wanted to broaden the scope, which clearly seems to be the case, why do so in only one direction? It just doesn’t make a whole lot of sense to me. Bottom line, in terms of urban design, you could never JUST read/rely on this chapter. So why include it in a book that is otherwise a complete and thorough reference resource?

This brings me to my last quibble. Last post, I mentioned form factor. The size and shape of a book titled Field Guide is not irrelevant. The new edition is a BEAST. It’s bigger in every possible way compared to the original. And good gracious is it heavy!

I’m glad I own both editions, but I’ll be encouraging students to purchase the old one for the time being. Yes, the new one has more information, but at the cost of ease of use. Still, though, you’re not a real preservationist until your Preservationist Bible has lots of dog-ears and notes. And don’t even think of borrowing my copy. Get your own.