I wanted to bring together the stuff I learned from the infographics course I taught this semester and the workshop I led earlier this week. But then I realized trying to bring it all together in a blog post would make it way too meander-y, aside-packed, and also likely perpetually unfinished. So instead I’m going to hold off on discussing my spring course in depth and focus on the workshop.

The workshop was way better attended than expected. I’d take credit but I think this is mostly due to Mary Kayler’s all-around awesomeness and people’s intrinsic interest in the topic. I think the lecture followed by hands-on exercise worked out well: we hit some of the important theoretical points, but everyone also got to actually produce something. Plus, since some people had to leave early, breaking this down into segments made that much easier for everyone. Summarizing the workshop isn’t really feasible, but I do want to share the slides from my talk, and Deb Hydorn’s great handouts (one and two) from her own talk on the matter. Actually, while I’m on the topic, I thought it was pretty neat that Deb and I both approached infographics yet did so from such different perspectives. She got great work out of freshmen, and I’d like to think I did the same with seniors. Because we had different goals, we also used different tools, and I think that’s a great lesson.

Making a good infographic doesn’t have to mean climbing a steep learning curve. There are tools available at every level. You just have to figure out what you want.

Photoshop is really intimidating. It does so much different stuff. But for most of us, the editing we need is pretty basic. I made a little video covering the two main tricks I showed in the workshop. Enjoy! [btw: I made this in the brand new Adobe Voice which is fantabulous and nothing like any other Adobe product I’ve ever used. It deserves its own blog post, so it shall get one. Stay tuned.]

InDesign isn’t something I can teach at all in blog form, but I do want to say a few things about it. First: it’s hard to learn. I mean it. Short of GIS, it’s definitely up there. On the other hand, knowing how to use InDesign opens many doors. Laying out a book, newsletter, magazine, poster, or really anything in print will look waaaaay more professional if it’s done in InDesign. Plus, it’s the standard software across every business I know of. Best of all: using InDesign right means that you only have to make a layout ONCE, and then can use it for every issue thereafter. Ok, wait, bestest of all: InDesign gets people jobs, and makes them irreplaceable, especially if they have the chops in their field in the first place. All this to say that I think there is value in learning it, for infographics and lots of other uses, super hard learning process notwithstanding. Interested in getting a quick tutorial? Come find me. I’m easily bribed, preferably with Paul’s donuts. 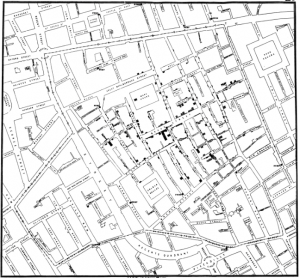 Though Minard’s map still is considered the best infographic ever (with one exception), I do want to close by reiterating something that John Snow’s map highlights. He mapped the location of cholera cases and also that of water pumps. People didn’t now where cholera came from back then *cough*bad humors*cough* but his map made that connection. Looking at it, it’s clear that water contamination at one particular pump is to blame. My point: an infographic can do more than give information. It can produce knowledge, or at least illuminate something that wasn’t obvious at all. All this to say: go forth and infographic. But do it well. No pressure.

One thought on “Infographics ad nauseam”